This entry was posted in Education: resources for teachers and tagged Boe-Bot, education, Parallax on 18 Nov 2016 by Vanessa Mazzari.

In this article, we are going to be looking at the Boe-Bot robot, a robot that is not very well known in Europe, but which dates back quite a long way in its home country, which is the United States. The Boe-Bot, from Parallax is a very well made differential drive two-wheeled robot that is ideal for beginners to robotics. So why is the Boe-Bot robot so popular? First and foremost because of the company that produces it. Parallax is very well known among electronics enthusiasts. The company has been producing very high-quality electronic components for many years, in particular microcontrollers. It was therefore only natural that Parallax should turn their attention to the community of robot enthusiasts, offering them an easy-to-use robot suited to their needs and based (of course) on one of their own microcontrollers, i.e. BASIC Stamp 2.

The Parallax robot range : the boe-bot and other robots

Parallax has several robots in its range. The first is the Boe-Bot, which is the subject of this article. The Boe-Bot robot is a very comprehensive and interesting base for robotics as it handles all the standard robotics problems (differential drive, odometry, obstacle detection and avoidance, etc.). The Boe-Bot robot is robust and compact and comes with a step-by-step introductory guide to help you build and program your robot. This guide, which we will be coming back to later, is quite clearly a major advantage when choosing the boe-bot robot. Parallax also produces the SumoBot, which is a lighter version of the Boe-Bot specially designed for robot sumo tournaments. This robot can be purchased separately or in sets of two with a sumo mat for the competition. The SumoBot is obviously designed for a particular activity, and is very educational in terms of robotics programming.

Whatever the robot, Parallax products are of a very high quality. The table below compares the features of the three robots described above. Parallax also has many accessories, sensors and other components you can use to improve your robot. For more information, have a look at our Parallax range.

Who is the Boe-Bot robot designed for?

The Boe-Bot serves as a good introduction to both robotics and electronics. It comes with many electronic components that act as sensors. Although the manual supplied with the Boe-bot robot does not require any prior knowledge of robotics, electronics or programming, the Boe-Bot robot is not really intended for children (unlike the Mindstorms Lego robot), if only because some of the parts are quite small.
It is worth noting that the Boe-Bot robot does not require any soldering or tricky operations. The electronic components are inserted manually into the notches provided for this purpose. The Boe-Bot robot is a truly educational robotics kit.

Opening the box of the Boe-Bot robot

You are immediately struck by the quality of the elements supplied as soon as you open the box of the Boe-Bot robot, particularly the guide supplied with the robot. Its 364 bound pages of clear text and numerous diagrams explain step by step how to assemble the Boe-Bot robot, how the various electrical components work (LED, resistances), how to program in BASIC, and the fundamentals of the mechanisms specifically used for programming robots (odometry, distance calculations, etc.). However, it might be worth pointing out that the guide is only available in English (but you can download the guide in other languages on the Parallax web site).

The Boe-Bot robot also comes with a CD containing the necessary drivers and the tool for programming the microcontroller used to develop programs in BASIC. Further proof, if proof be needed, that Parallax really wants to get things right is that the CD contains no fewer than 130 PDF documentation files, representing all the manuals published by Parallax. Below are a few examples of the PDF files included:

Now you understand why the Boe-Bot robot is a very interesting introduction to robotics!
So let’s take a look at the robot itself. 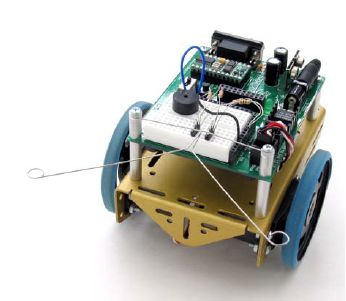 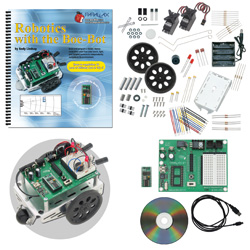 The robot has an aluminium chassis. The propulsion system consists of two servo motors and two wheels. The Board of Education is the equivalent of the robot’s motherboard, where you will be inserting the microcontroller. Finally, electronic or mechanical components are supplied and act as sensors. There are for example whiskers, which act as touch sensors, photoresistors, which detect light, and infrared sensors, which detect obstacles.

Programming of the Boe-Bot robot is done using the software supplied on the CD, called BASIC Stamp. The Boe-Bot robot is connected to the PC simply using a USB cable, which is supplied. The Boe-Bot also exists in a Bluetooth version for those who prefer to program the robot without having to systematically connect it to the PC (and it’s easy to understand why!).

The manual gives step-by-step examples that help you to immerse yourself in this programming of the Boe-Bot robot very quickly. There is no need for advanced programming skills, because only BASIC is used (hence the name), but you can tackle all the most popular robotics topics such as navigation, obstacle detection and more.

Furthermore, many examples of codes are supplied with the programming software, making learning even easier.

What is there left to say that has not already been said? It is clear that the Boe-Bot robot is a good choice as an introduction to robotics. It is easy to use, extremely educational and, most importantly, has lots of potential for expansion thanks to the many components and sensors available on Generation Robots.