This entry was posted in Robotics tutorials and tagged education, lego, mindstorms, NXT-G, Programming on 26 Sep 2015 by Vanessa Mazzari.

This article presents NXT-G, the development environment supplied with Lego Mindstorms NXT. We will be presenting the main characteristics of this graphical environment and describing how to use and design a program using NXT-G.

The Lego Mindstorms NXT kit has been on the market since 2006. This robot is easy to build and modify (being based on the famous Lego bricks) and is also very comprehensive. The basic kit comes with no fewer than 3 servo motors and 4 sensors. However, what makes the difference as far as personal robotics and especially autonomous robots are concerned is the ability to program the robot.

One of the major interests of recreational robotics is the possibility of making your robot as autonomous as possible and able to carry out specific tasks. To this end, having an advanced, easy-to-use programming system is an important factor in the choice of robot. Lego Mindstorms NXT offers a highly effective graphical programming language that is easy to use even for those with no particular skills in development languages.

This language is called NXT-G and is supplied with the basic kit (which is not the case with all ranges of robots). This is the programming environment we will be presenting in this article.

The installation CD supplied with the basic kit is used to install NXT-G. This environment is compatible with Mac and PC. The minimum technical requirements are as follows:

The NXT-G environment is a specific version of the professional LabView product (http://www.ni.com/labview) published by National Instruments. In other words, the basic platform is reliable. LabView is indeed very widely used in the industry.

The figure below shows the NXT-G development environment. 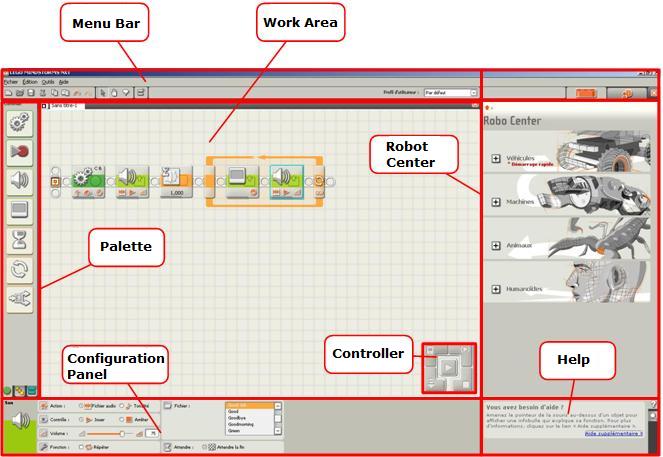 Programming using NXT-G is entirely graphical. No programming knowledge is required to produce advanced programs using NXT-G. Strictly speaking, you will not create any lines of code using NXT-G. By default, the work area only shows a starting point. From this starting point, you drag and drop one of the boxes from the palette. The blocks are added one after the other on an axis termed the sequence beam. 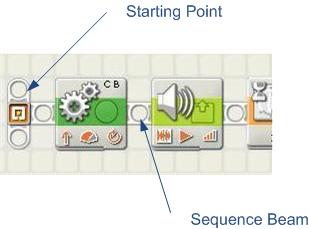 Blocks that are not connected to a sequence beam are not taken into account by the program. It is possible to build a design running more than one program sequence in parallel. To do this, additional sequence beams can be created from the starting point, as shown in the following figure. 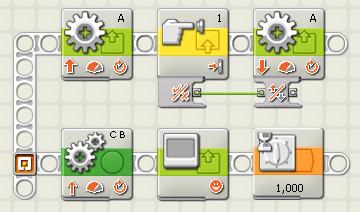 The blocks available in NXT-G

The blocks can be divided into 7 main families, as per the NXT-G help.

It is easy to see from this list that the palette of programs that can be created using NXT-G is very large. Let’s take a quick look at the blocks available.

The first program using NXT-G we are going to design here is relatively simple. It uses the sound sensor and displays the sound level (as a percentage of the sensitivity of the sensor) on the screen of the robot’s intelligent brick.

The final program using NXT-G is illustrated in the following diagram:

We are going to build this program step by step.

Click on New in the File menu. This creates a new program with a blank work area. For greater ease, use the entire palette (click on the second tab at the bottom left, in the vertical tool bar).

Open the list of “Sensor” blocks and drag the sound sensor to the sequence beam as shown in the figure below: 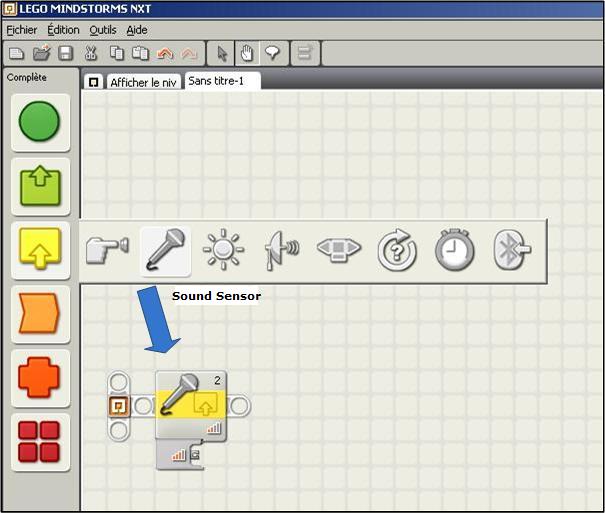 In the list of “Advanced” blocks, drag the “Number as text” block as shown in the following step. 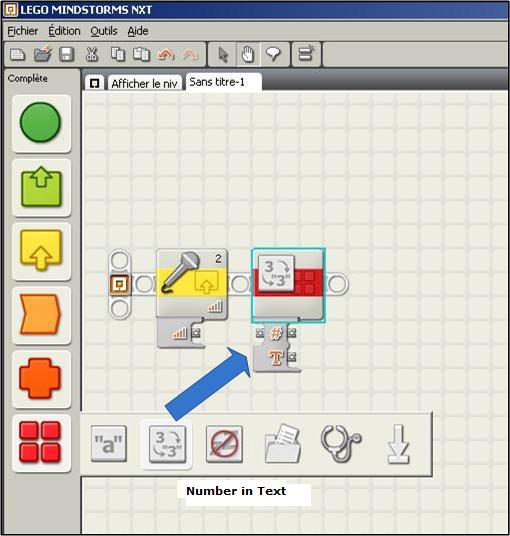 Now that you have got the idea, repeat this operation to place the following blocks in order on the sequence beam:

Put this entire sequence into a loop so that the program will repeat several times and you will consequently obtain measurements at regular intervals.

To do this, drag a “Loop” block from the list of “Flow” blocks and then move all the blocks in the work area inside the loop, keeping them in order and ensuring that they remain on the sequence beam, (remember that a block that is not on a sequence beam attached to the start point will not be interpreted by the program, although this will not generate an error).

By default, the loop is set to “Forever”. This means that the program will run indefinitely until you stop it by pressing one of the buttons on the intelligent brick.

If you wish, you can change this by clicking on the loop and entering a set a number of display iterations in the configuration panel for the loop block (the configuration panel updates automatically according to the block you have just clicked on). If you only want to display 10 measurements, select “Counter” in the drop-down list and enter 10 in the “Count” space that appears below.

At this stage, your program looks like the figure below. 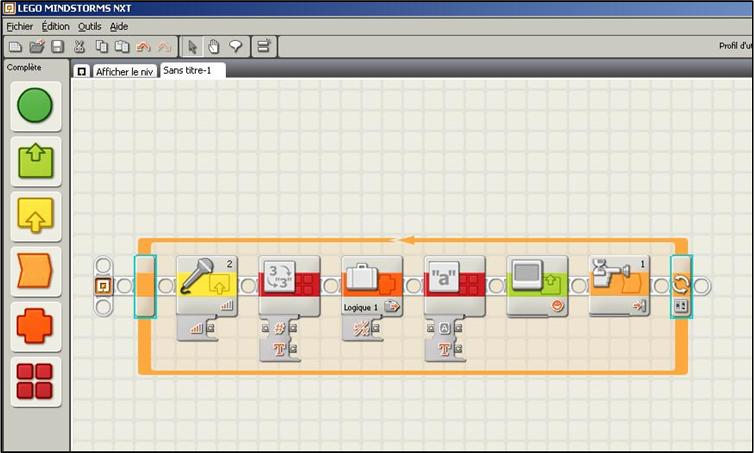 You now need to link the blocks so that they pass data to each other.

To exchange information, the blocks use data wires. Data wires are used to pass data from one block to another. The colour of the data wire determines the type of data:

If your wire is grey, this means that the input port is expecting a value of a type that is not the type defined by the output port on the first block. This is termed a broken wire. Broken wires are therefore errors in your program.

The following figure tells you a little more about data hubs and wires in NXT-G: 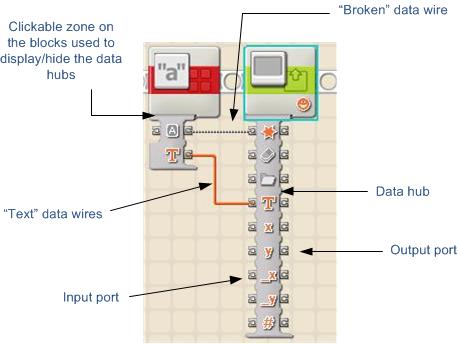 Now that you know now a little more and you have practised opening data hubs and drawing data wires between blocks, let’s finish our program.

Go back to the first figure in this paragraph and draw data wires between the correct ports. Remember that a grey dotted data wire tells you that you have made a mistake. Only coloured wires are correct.

Here are a few comments on these data wires. We have numbered them for clarity. 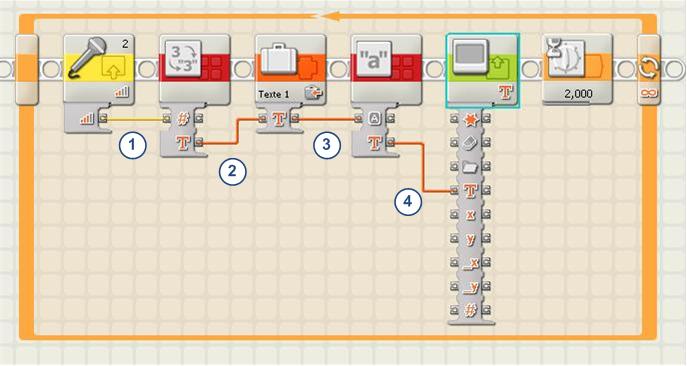 Save your work and then test it on your Lego Mindstorms NXT robot by clicking on the “Download and run” button in the centre of the controller.

National Instruments, the publisher of the LabView professional software, offers a toolkit that adapts to LabView, making it possible to go further in robot creation and development.

National Instruments’ idea is quite simple: provide a simple, effective environment with NXT-G and then, for those who wish to take things further and get professional with their robot building, LabView becomes the natural tool to use. From this perspective, Lego Mindstorms NXT acts as a prototype platform.