This entry was posted in Robotics news and curation and tagged Compétition, education, Evénement on 25 Apr 2016 by Vanessa Mazzari.

The aims of these competitions are many and varied, and include providing forums for enthusiasts, promoting scientific and technical education, marketing a particular make of robot, setting manufacturing challenges, etc. In this article, we have opted to categorise the most influential competitions according to their objective.

Our list of competitions is by no means exhaustive. For a relatively comprehensive overview of the competitions organised worldwide, you can visit the excellent robots.net website, which includes an up-to-date list of all the major events (http://robots.net/rcfaq.html).

Below is an overview of the competitions described in this article:

To see more videos about competitions, see our playlist on YouTube http://www.youtube.com/view_play_list?p=905DEAAEB0C20AED

This category includes competitions open to anyone and everyone.

This competition is several years old. It was previously called the RobOlympics, because its organisers had set it up as the Olympic Games of robotics. The competition is held every June in San Francisco and is something of a Mecca for robotics. Teams come from all over the world, with no barriers in terms of age, skill or educational background, to compete in some 70 disciplines.

Imagine, if you can, robots competing in football, sumo, freestyle wrestling, maze solving, fire-fighting exercises, racing, kung-fu, golf, acrobatics, penalty shoot-outs, hockey, obstacle racing, basketball, weightlifting, marathons, etc. Some events are particularly violent, as their aim is quite simply to destroy the opposing robot! You will find the official presentation video opposite.

Since this competition is considered the Olympics of personal robotics, we couldn’t resist showing you the medal table for 2008! 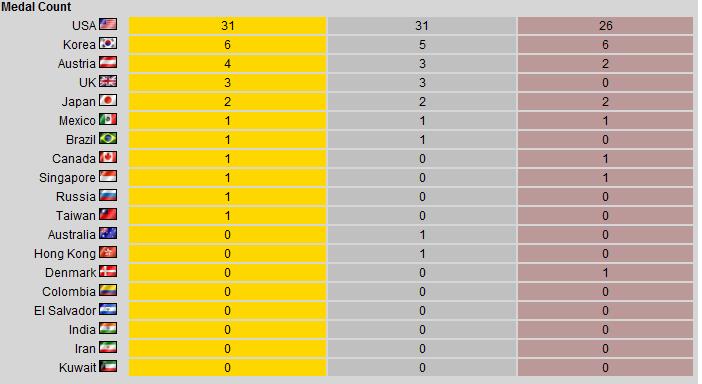 It is possible to attend these events as a spectator. The full list of events is available at http://robogames.net/events.php

The RoboCup is an international competition aimed at promoting research and artificial intelligence. Founded in 1993, this competition plays host to teams of various nationalities competing in different competitions using autonomous robots.

The stated objective of the RoboCup is to build, before the mid-21st century, a football team made up entirely of autonomous robots able to beat the (human) World Cup holders. As a result of this ambitious objective, football was selected as the gold standard for this competition (to find out more, see http://www.robocup.org/about-robocup/objective/ RoboCup is a contraction of “Robot Soccer World Cup”. Playing football is a difficult challenge for a robot to accomplish because:

These characteristics are the exact opposite of those of a game such as chess, and the programming is therefore totally different.

This competition is held every year. The last was held in China, and the next one will be in Austria.

The basic idea is to decide on a single competition (football match) involving identical robot platforms, because the objective is first and foremost to drive progress in programming intelligent robots. Before 2008, the standard platforms were Sony’s famous AIBO dogs. When Sony decided to halt production for economic reasons, the NAO robot produced by the French company Aldebaran was selected (http://www.aldebaran-robotics.com) for the standard league (http://www.tzi.de/4legged/bin/view/Website/WebHome). 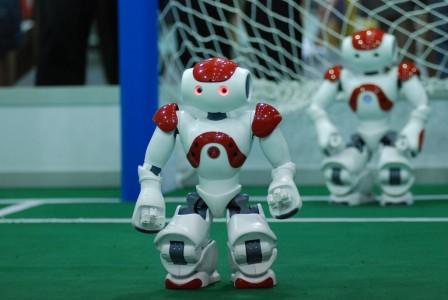 The RoboCup involves various competitions. To find out more, you can visit the official RoboCup website at http://www.robocup.org.

The Rhoban Football Club (Bordeaux, France) won the RoboCup 2016 Edition. Rhoban is the startup behind the Metabot four legged robot! Created in 1998, Eurobot is a international amateur robotics contest open to teams of young people, organised either in student projects or in independent clubs. Eurobot takes place in Europe but also welcomes countries from other continents.

This competition, organised by a non-profit organisation based in Texas, is only for middle and high school students in the United States. No fewer than 700 schools take part!

The aim is to maintain young students’ interest in engineering sciences in general, and in robotics in particular. Participating schools have six weeks to design the best remote-controlled robot before competing in local, regional and then national competitions. One of this competition’s very good ideas is that students join forces with a technician or engineer from a local business, thereby building a strong link between education and local industry.

The competition addresses a different subject every year. In 2008, participants had to design a robot capable of assembling an aircraft (no less!), albeit a simplified one.

FIRST is an abbreviation for “For Inspiration and Recognition of Science and Technology”, which accurately summarises the aims of this organisation founded in 1989 by Dean Kamen. FIRST runs several competitions (leagues), not all of which are restricted to the United States:

FIRST Robotics Competition for high-school students
This competition for secondary-age students is organised very similarly to its cousin, the BEST competition. Teams of students receive a standard robotics kit, an objective and some rules. They then have six weeks to design the best robot, seeking help from the engineers in their region. The major problem with this competition is that substantial funds need to be raised to assemble a team (around $10,000 to participate in a regional competition).

FIRST Tech Challenge for high-school students
This competition is very similar to the previous one, except that it is aimed at a broader, younger public, the competition being more accessible in terms of difficultly and cost.

FIRST LEGO League for 9 to 14 year-olds
As its name indicates, this competition is aimed at an even younger target (9 to 14 age group), and is based exclusively on the Lego Mindstorms kit. This “league” is particularly successful and has its own website: www.firstlegoleague.org.

The competition comprises two parts, i.e. the project and the game. The project consists of identifying a problem, finding a solution and sharing it. These three stages must be delivered in the form of a presentation lasting no longer than five minutes. The game component is similar to other competitions. It consists of assignments (mini tasks) that the Leo robot must complete autonomously.

Junior FIRST LEGO League for 6 to 9 year-olds
Intended for the very young, this competition constitutes the simplest level of the competition.

FIRST Place for ages 6 to adult
This is not strictly speaking a competition, but rather an opportunity for groups or individuals to familiarise themselves with the field of personal robotics. To find out more, you can visit the official First website at http://www.usfirst.org

Challenges for manufacturers and university laboratories

This is a competition organised by DARPA, the American Defense Advanced Research Projects Agency (responsible for many of our Internet technologies, for example), the objective of which is to design a driverless vehicle. The Grand Challenge has been held twice, in 2004 and 2005. Vehicles had to autonomously navigate a precise route covering 240 kilometres in the Mojave Desert. No vehicle successfully completed the route in 2004, but five did so in 2005, with the Stanford University vehicle winning the event.

A third Grand Challenge competition was organised in 2007. It was called the Urban Grand Challenge, as this event, unlike the previous two events, took place in an urban environment with all the constraints that this implies (compliance with traffic signals, unpredictable obstacles, taking other vehicles into consideration, route recognition, direction finding, etc.). The event took place on a disused military air base, where the robots were part of a traffic flow that included vehicles driven by experienced drivers. Carnegie Mellon University won the event.

There are currently no plans for further events. DARPA’s objective is to stimulate research in the field of driverless vehicle design, especially in the military sphere. To find out more, visit http://www.darpa.mil/grandchallenge/index.asp.

All use and reproduction subject to explicit prior authorization