Quantity
Total
Warning, this is a special order, please contact us to know about the delivery details 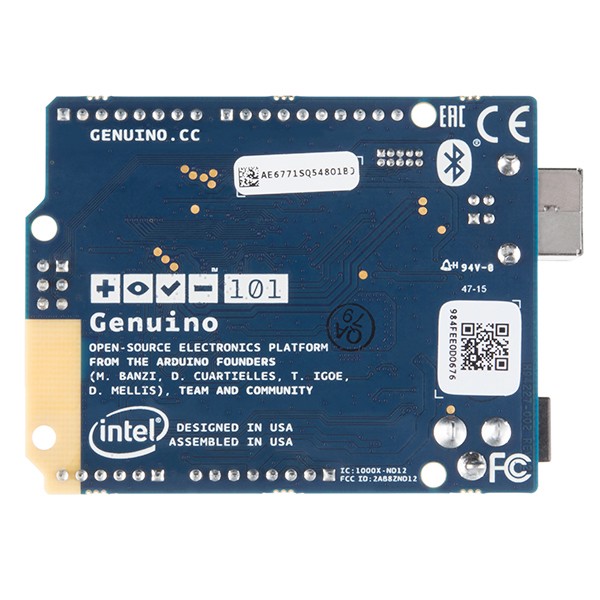 Genuino 101: as simple as an Arduino Uno

Genuino 101 has everything and more to reassure lovers of Arduino Uno – it’s an electronics board boasting a similar form factor and peripheral list as the UNO as well as being fully programmable in the open-source Arduino environment. Which means you have 14 digital inputs/outputs (only 4 of which can be used as PWM outputs, rather than 6), 6 analogue inputs and a USB connector.

So what makes Genuino 101 so different? Well let’s take a closer look...

…and test the performance of its Intel® Curie microcontroller!

With the Genuino 101, you benefit from a dual-core Intel® Curie microcontroller clocked at 32 MHz (rather than the 16 MHz of the Arduino Uno). Plus, there’s a 6-axis accelerometer/gyroscope and above all a Bluetooth Low Energy (BLE) connection allowing you to begin designing low-power consumption connected objects. In short, a superb example of what Arduino and Intel® are capable of when they join forces!

Technical specifications of the Genuino 101 board

Resources for the Genuino 101 programming board

The Genuino 101 board opens up new programming and design horizons. It has everything you need to explore them!

Validation of the subscription to the newsletter