This glossary of robotics terms is not intended to be exhaustive, merely a list of some specific terms that you may encounter in the course of your reading about mobile robots and that we thought it would be helpful to define.

In automation technology, closed loop control describes an algorithm designed to stabilise and improve the reaction of a system in relation to its initial instructions. It compares a system’s status with its initial instructions and makes corrections where necessary. For example, if a robot is programmed to follow a white line marked on the floor, an algorithm will be programmed that will check any gap relative to the line being followed and take corrective measures if need be when the gap is too wide (which is why the movements of a robot like a Lego Mindstorms NXT programmed to follow a line are jerky).

To find out more about closed loop systems:

BEAM is an acronym for Biological Electronic Aesthetic and Mechanical. BEAM robots are devoid of intelligence as they have no embedded microcontrollers and therefore cannot be programmed. They are made solely of mechanical parts and simple electronics. These robots are more akin to toys. Génération Robots does not intend to supply BEAM robots.

Sensors are robot components that enable it to determine its environment and its internal status. Sensors either supply data to some central intelligent module (there may also be more than one) or act directly on effectors in a reflex arc.

A CMUcam is a small embedded camera, specially designed for mobile robotics. It comprises a camera and a microcontroller offering simple image processing and blob tracking services. The CMUcam is therefore a relatively simple embedded vision system.

The first specifications for this type of camera were produced by Carnegie Mellon University, a university well-known in the United States for being at the leading edge in the field of robotics.

To find out more about CMUcams:

For two-wheel robots or those with chains, this consists of adjusting the speed and direction of rotation for each wheel or caterpillar track to determine the robot’s direction of movement and rotation. For example, if both wheels are turning in the same direction at the same speed, then the robot goes in a straight line. In contrast, if the speed of the right wheel is increased the robot turns to the left. The angle of the turn depends on the difference in speed between the two wheels.

A dictionary definition of echolocation could be: “Means of locating obstacles or prey, used by various animals that live in the dark (bats) or water (whales and dolphins), consisting of emitting ultrasonic or highly pitched sounds and assessing the time taken for the echo to return from different directions.” In programmable mobile robots, this principle is used by ultrasonic sensors.

This is a robot’s operative component. This often involves motors triggering movements (movements of a robot arm, wheel rotation, a hexapod’s leg movements, etc.). It may also involve pneumatic or hydraulic jacks.

Another term used is actuator.

As regards the motors found on mobile robots, the term servo motors is more common. A servo motor is a motor able to reach a set position and hold it. This may mean a particular angle or a given distance to travel. When you program a servo motor for your mobile robot, you set a rotation duration and/or speed and/or number of rotations, etc.

A hexapod, as its name implies, has six legs (as against two-legged or wheeled or caterpillar-tracked robots). Parallax offers a crawler kit converting a Boe-Bot into a hexapod (Boe-Bot is a wheeled robot).

This is a technique used to estimate the position of a moving mobile robot. Literally, it is the science of measuring and controlling a robot’s movements. To do so, measurement is based on individually measuring the distance travelled by the robot’s wheels. The idea is actually fairly simple: if the direction, speed and duration of a wheel’s rotation are known, and if these are measured for all of a robot’s wheels, then the location of a robot relative to its departure point can be estimated.

Odometry works relatively well with wheeled robots, but it is unreliable with caterpillar-tracked robots because the tracks’ contact with the ground is uncertain, and it is very poor with robots that use legs to move. The problem with odometry (or dead reckoning) is that errors aggregate over time. It is often beneficial to combine these measurements with sporadic measurements taken from other sensors (RFID, infra-red, etc.).

To find out more about odometry:

Pathfinding consists of finding how to move around an environment between departure and arrival points while taking various constraints into account.

Planning travel in mobile robotics is a complex matter. Robots move around in real environments. Firstly, a robot has only an estimated assessment of its position, its sensors not being perfect. Similarly, it has to move using effectors which can only take it where it has decided to go with a certain degree of accuracy. To take these uncertainties into consideration, probabilistic mathematical models need to be used. In addition, if humans or animals are added to the environment, how these are going to move around needs to be predicted, in order to avoid them.

To find out more about pathfinding:

This problem refers to a sensor’s inability to uniquely distinguish all locations in an environment as a result of its internal limitations. For example, while an ultrasonic sensor enables a robot to position itself alongside a wall, it doesn’t usually enable the robot to know where it is located along the wall – is it at the start, middle or end? Two measurements taken at any point along a wall will provide the same information (unless the robot reaches the end and it detects the absence or presence of a corner).

This is a computer program based on the workings of biological neurons. Neurons are biological cells organised into layers, each neuron receiving an electrical signal through its multiple connections with the neurons in the layer below and triggering or not an output signal to the layer above on the basis of an activation function. This modus operandi is replicated in artificial neural networks because they make for robust and flexible programs able to learn tasks from learning data sets supplied to the networks. This is referred to as induction, or learning by experience.

To find out more, see the full Wikipedia article on (artificial) neural networks:

A robot is a mechanical device carrying out tasks following a program that has been assigned to it. Generally, robots have an architecture which can be shown diagrammatically as follows: 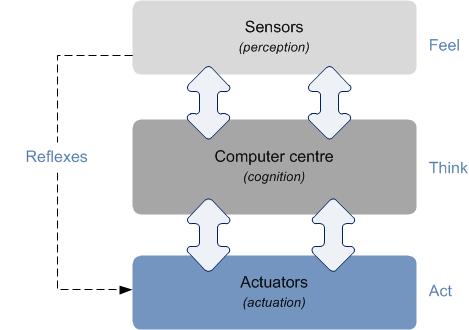 The word “robot” comes from Czech and means slave. It was used for the first time by the writer Karel Capek in his play RUR (Rossum’s Universal Robots).

The term robotics was introduced by the writer Isaac Asimov, the famous author of the three laws of robotics.

The robots offered by Generation Robots are mobile robots (autonomous or otherwise) that are programmable. These small robots are good models for learning about robotics.

A new view of robotics within which robots are perceived as autonomous organisms that learn without either human intervention or the explicit programming of tasks. This view is heavily based on the Darwinian principles of the selection of the most appropriate factors and behaviours.

The idea is to make use of technologies such as genetic algorithms and neural networks so that robots “learn” by themselves, which is the best strategy for resolving a problem, learning from a sequence of successes and failures.

The robots resulting from this theory share certain characteristics with living organisms, such as simplicity, hardiness, adaptability and flexibility (since they adapt to the environment and are flexible when that environment changes).

To find out more:

This technique involves including probabilities in the programs written to run robots so as to deal with the uncertain nature of the environment, in order to optimise both perception and actions. The advantage of this technique is that robots programmed in this way can overcome inaccurate models and imperfect sensors.

This is a special robotics architecture (hardware and software) introduced by Rodney Brooks (a professor at MIT and former director of the Irobot company) in 1986 in his article “Mobile Robots: Inspiration to Implementation”. This architecture, associated with the behaviour-based robotics school, has had some influence in the world of mobile robotics.

The basic idea of subsumption architecture is the organisation of a robot’s behaviour into layers, from the least abstract to the most abstract. The lower layers (the least abstract) have a higher priority. The upper layers are described as subsuming the layers below. Each layer is connected to both sensors and effectors. Consequently, an event interpreted by the sensors will trigger responses in each layer, which may either conflict or be consistent with each other.

The lower layers, those with the higher priority, act like the reflexes in living beings, while the upper layers act like planning agents with a higher level of abstraction.

Rodney Brooks’ main idea is that it is helpful to create a brain making it possible to represent the external environment and that this type of behaviour-based architecture can indeed lead to behaviour that appears intelligent. Rodney Brooks takes the view that the world is his best model.

Although it has influenced robotics engineers, this theory does however have certain drawbacks, such as the fact that it is difficult if not impossible to increase the number of layers without running the risk of serious interference, or that robots built in this way are inflexible (there is no adaptation or learning mechanism in the layers as implemented, nor in their organisation).

This is a technical procedure used to calculate or measure the distance of a remote object through the use of optical, acoustic or radio instruments. The instruments used are called range finders. The ultrasonic sensors offered by Génération Robots for example can be used for range finding

In the world of robotics, infra-red, ultrasonic or laser range finders are often found.