This article describes how to use the Parallax Say It Voice Recognition Module to control a Boe-Bot robot using your voice. Speech recognition is an important asset for a robot, increasing its ability to interact with human beings and above all using their most natural form of communication.

In this article, we will be showing you how to install the Say It Module on a Boe-Bot robot, how to configure the Say It Module using the graphical interface supplied, how to test these settings, and how to generate BS2 code to trigger actions according to the recognised words, since this is after all the ultimate goal. The article therefore follows a logical order. However, before introducing the Say It Module, a quick recap of the fundamentals of speech recognition may prove useful.

For an introduction to the Parallax Boe-Bot robot, please refer to this article.

The fundamentals of speech recognition

Automatic speech recognition together with speech synthesis is part of what is known as speech processing.

This is a two-phase operation:

In the context of robotics

Introducing speech recognition is a natural goal in robotics as it is one of the most common forms of communication for humans. In human language, this is referred to as natural language. This is very advanced as it depends on the context, the person, the moment, etc. Although a great deal of progress has been made in robotics in recent years, it has not yet mastered this.

Leaving aside highly advanced robots in laboratories such as ICub, or the very impressive progress made in the military sector, the problems encountered in personal robotics are more mundane. Speech recognition with a mobile robot depends not only on the quality of the components but also on the environment (as always with robotics), which can be noisy or cause an echo, or modify the perception of the sound due to its shape (the robot could perceive a sound differently if it is going along a wall for example). As you will see later, controlling a robot using your voice is more complicated than sitting in front of your desk dictating to your computer using a microphone.

Installation and configuration of the Say It Module

The Say It Module

The Say It Module is a board measuring 6.3 cm by 1.3 cm that plugs into the application connector. It has a microphone at the top and a very useful LED telling the user when the module is in voice recognition mode. It can be used to record up to 32 commands (configured words).

Connecting the Say It Module to the robot

The Say It Module plugs into the application connector (circled in red on the picture below). The power switch must be at 0 when the board is plugged in. 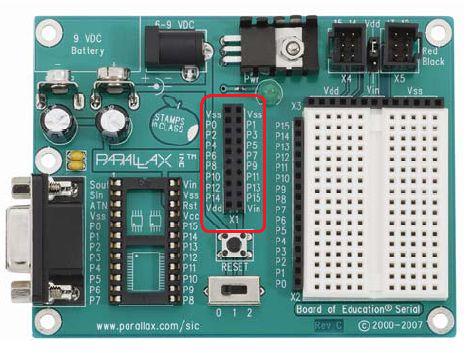 Be aware that the way you connect the board is important. To avoid mistakes, the Vdd sign (Vdd is the 5V regulated input) is marked at the bottom left on the back of the Say It Module. The pin closest to this sign should therefore be connected to the connector marked Vdd on the application connector (in the bottom left of the diagram above).

Once connected, the Say It Module is in the following position: 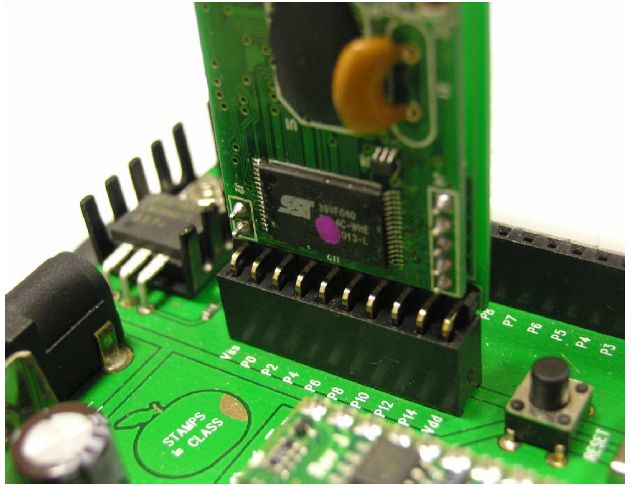 Once the board is plugged in, download and install the Say It GUI application. This can be obtained by clicking on http://www.parallax.com/Portals/0/Downloads/docs/prod/comm/SayItGUI-1.1.5.zip

Once the software is installed, turn on the power to the Say It board by switching the Boe-Bot power switch to 1 and launch the Say It GUI software. You must specify the COM port to which the Boe-Bot robot is connected and press the Connect button (both circled in red in the figure below). Please note that the BASIC Stamp Editor programming environment Debug terminal must be closed when you click the Connect button. 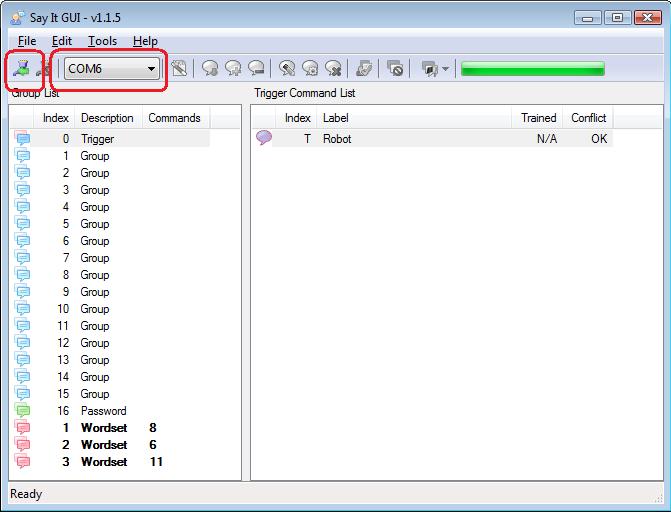 If this is the first time you are connecting the Say It Module, it will automatically ask you if you want to download something called a “Bridge” onto your BASIC Stamp. This BASIC Stamp add-on is required to operate the Say It Module. Click on Yes, and leave it to download the Bridge. When it has finished, the progress bar at the top right of the Say It GUI interface will be completely green.

All done!! You are now ready to start using the module.

If you need any further details, you can download the full documentation for the Say It Module in English at http://www.parallax.com/Portals/0/Downloads/docs/prod/comm/30080_SayItModulev1.2.pdf

Before changing the settings on the module, we are going to test the words pre-programmed on the module to get an idea of how it is used and of the various concepts we will be needing later.

To carry out the following tests, ensure your robot is connected to your computer using the USB cable and that you have connected the robot in the Say It GUI interface as explained previously in this document. Set the power switch on your robot to position 1 (i.e. board on but motors off).

In the Say It GUI interface, select the first line in the list on the left displaying the word Trigger, then click on the Group Test button as shown in the figure below. You will have noticed that the LED on the Say It board lights up when the robot is in listening mode. This will prove very useful later on.

A bit more about concepts

In the last paragraph, we looked at the trigger concept and other concepts such as groups and wordsets. Let’s look at these in more detail.

This is the word used to trigger speech recognition, hence the name. The robot knows that after this word you are going to say a word that will correspond to a command.

The configured words are commands, as they are meant to trigger an action (we will do this later). Commands are separated into groups.

Wordsets are pre-programmed groups in which words cannot be added or deleted.

Configuring your own commands

To add a new command, proceed as follows:

That’s it, your command is now configured. To test it, use the Group Test button as before. If you are not satisfied, start the configuration process again. Commands are deleted using the Remove Command button.

Now you know how to add a command, you can populate your own groups.

You have already seen that the Say It Module can recognise commands, and that we can also add commands. Let’s now see how to tell the robot to perform an action when it recognises a command.

The Say It GUI allows you to generate BS2 code (PBASIC) using the Generate Code button (the one showing a magician’s wand on a white sheet of paper).

In our example, we have added the following five commands to group 1:

The interface asks you what to call and where to put the generated code. Once you have done this, you can close the Say It GUI and use the BASIC Stamp Editor, the Boe-Bot programming environment.

The generated code is quite long but, before testing it, you must change a parameter, i.e. the value of the VRGROUP parameter. Its default value is 0, which means it is expecting to recognise commands from group 0. In our example, we have added the five commands to group 1, so the VRGROUP value must be 1.

In the same way, in order for our test to be more relevant, we have modified part of the code as follows. Although this modification is not essential, it makes the test more eloquent (no pun intended!).

Run the modified program and test the various commands one after the other. The Debug Terminal should look like this: 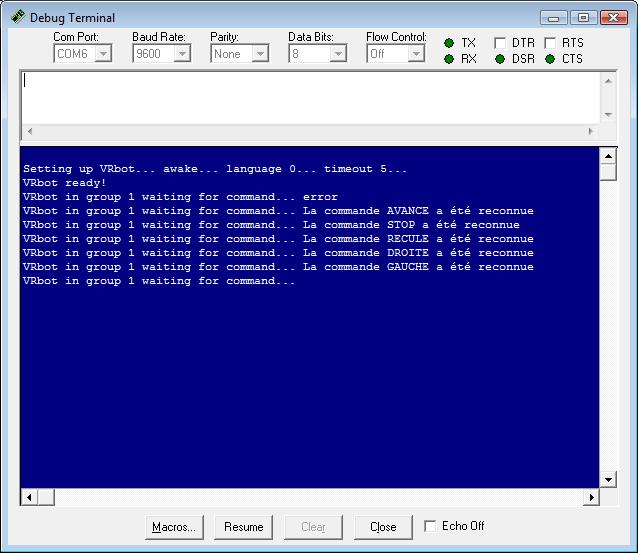 The first line contains the word “error”, indicating that it did not recognise any configured command during the listening phase. This shows how the generated code works, i.e. that the listening phase is in a loop that lasts five seconds each time. To change this setting, change the value of the VRA1 parameter in line 81.

We have added a series of routines at the end of the final code allowing the robot to move forwards, backwards, etc. and we have also added the call statement to these routines in the piece of code already changed previously, as shown in the following figure:

The code now allows you to control the robot using your voice! The complete code can be downloaded by clicking on this link.

To take the experience further, an example code is available from Parallax at http://www.parallax.com/Portals/0/Downloads/docs/prod/comm/SayItExampleCode.zip. In particular, it allows you to test the trigger concept.

All that remains for you to do now is test out this speech recognition module!

Explicit prior permission is required for any use or reproduction