In this example, we are using two Dynamixel servo motors mounted in a pan-tilt configuration, and the buttons on a Dynamixel controller (CM-5, CM-510 or CM-530; note the CM-700 controller has no buttons) to control it.

Assemble your Dynamixel servo motors into the following arrangement: 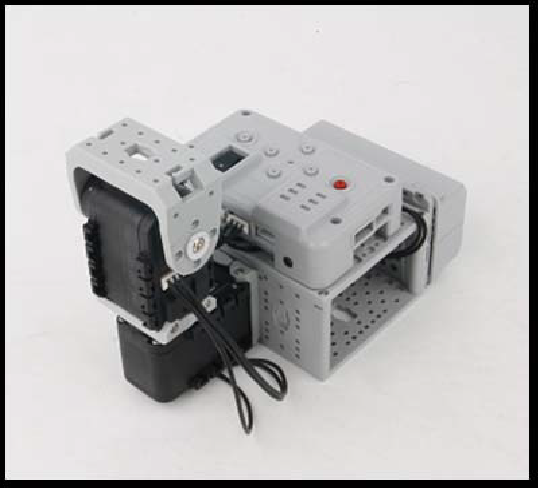 Be careful to properly set the servo motors’ 0 value to follow the axes marked below: 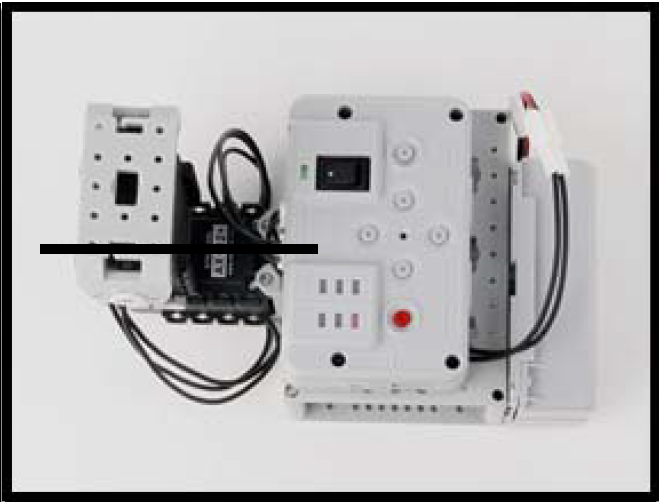 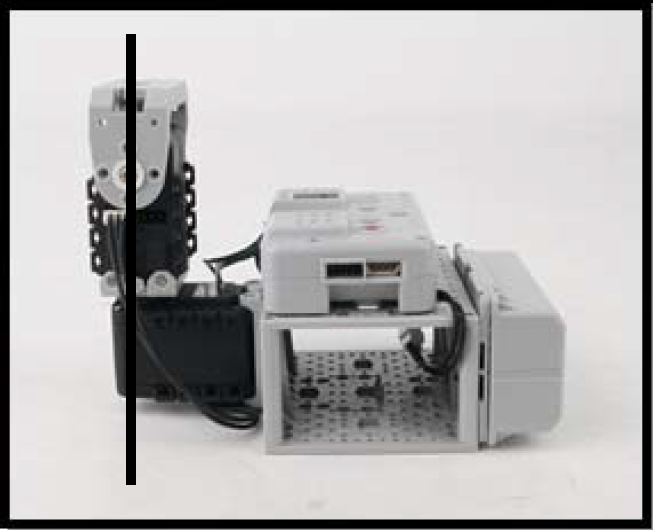 A detailed guide to assembly is available here.

Detect your servo motors (as hardware) with RoboPlus Manager, then open a new file in RoboPlus Task.

We are going to create a function to initialise the motors’ positions and then, in the main function, we will control the servo motors’ movements by pressing on the various buttons.

Double-click on a line in the Task file outside the main program (the ‘Start Program’ block) and select the ‘Make Function’ command. Call your new function ‘InitialAction’.

In this new function, we are going to initialise the speeds of the two servo motors and put them in their median position: 512 if the position sensor has 1,024 positions, and 2,048 for Dynamixel servo motors in the MX range where the sensor has 4,096 positions. Use the ‘Load (assignment value)’ command to carry out these actions. Your servo motors’ closed loop control (‘torque enable’) is usually enabled by default.

We then want to wait for the servo motors to have reached their position before moving on to something else. We are going to use the ‘Conditional stand’ command, then check the ‘moving’ value for each motor.

The command above means ‘Wait while motor 1 is moving or while motor 2 is moving’. It is therefore necessary for both motors to have completed their movements for the wait to end.

In the main program, call the InitialAction function, then create an infinite loop. 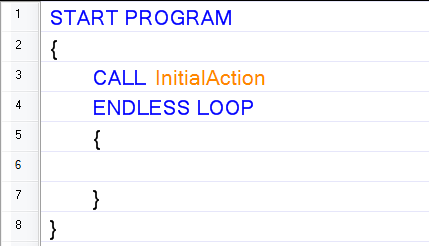 Within this endless loop, if one of the controller buttons is pressed, we are going to give a move command to the motors.

First, the program must check that the command we give does not exceed the servo motor’s capacity. To avoid collisions, we will restrict it to positions between 310 and 710. The ‘compute (arithmetic or bit)’ command must be used to carry out an operation (an addition, here) on a value and assign it to another value (or the same value, here the motor’s target position). 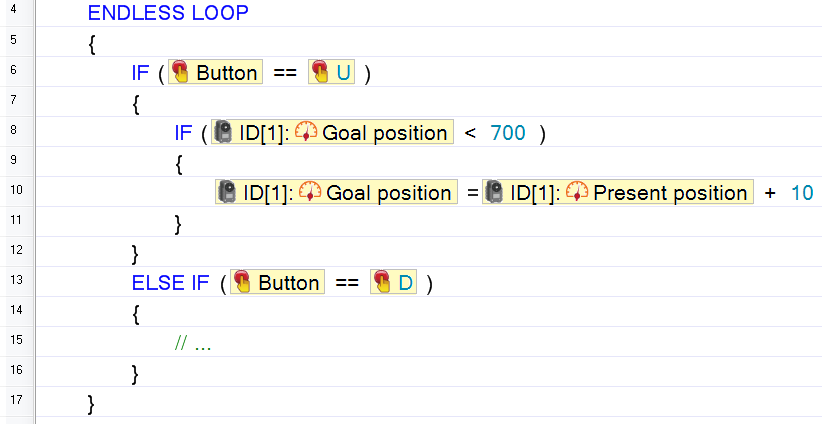 The IDs of the servo motors must naturally be altered, as must the direction of change for the target position, depending on the assembly of your servo motors.

The entire program is available here.

RoboPlus Motion is a tool enabling you to manage your robot’s movements. Using it, you can create and save sequences to be subsequently sent to the controller (in the form of a *.mtn motion file) and executed by the robot.

Set your controller to ‘Edit’ or ‘Program’ mode (depending on the controller). Then, in RoboPlus Motion, choose the right COM port (or run a search) and click on the ‘Connect’ button.

The RoboPlus Motion workspace is then divided into 3 areas. 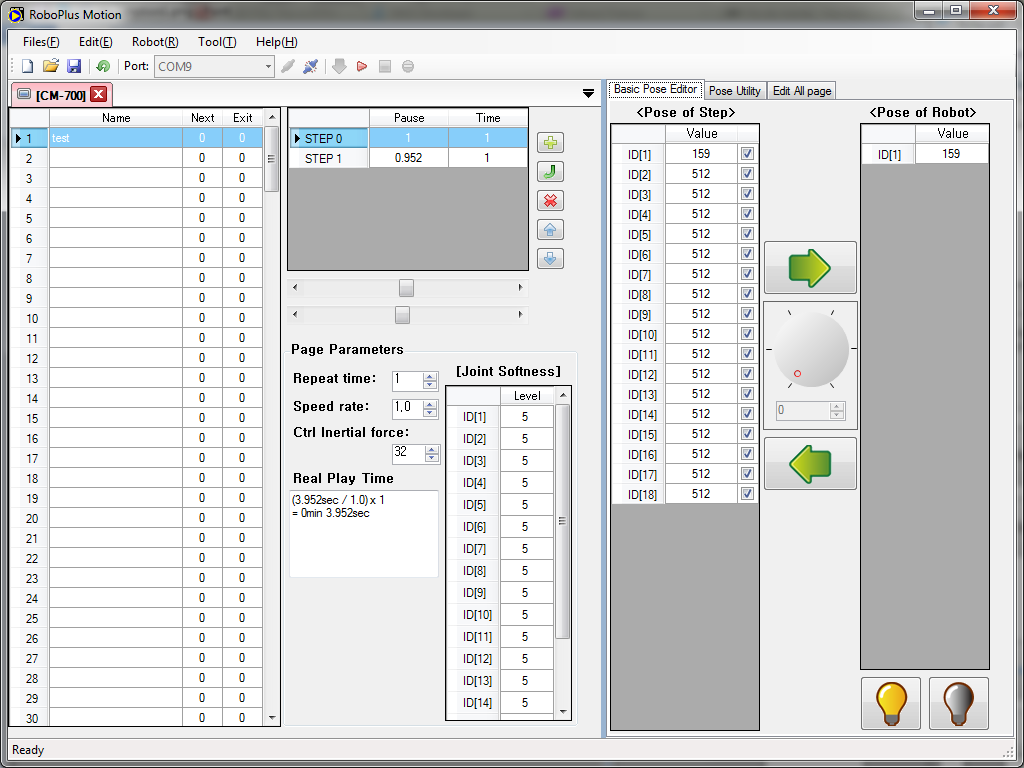 The left area shows everything contained in a motion file (and therefore what is sent to the robot). It holds up to 255 movement sequences, also called ‘motion pages’ (for example, raise arm, take a step, open pincers, etc.).

You can give a name to each sequence and state which sequence comes next by putting the following sequence number in ‘Next’. A sequence is limited to 7 steps as explained below, therefore complex movements need to be divided into several sequences.

The ‘Exit’ column is used to define a movement in the event that execution is halted midway, so you can set a final movement to avoid the robot stopping suddenly in an unstable position. 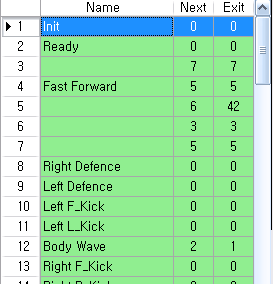 The middle panel is used to manage sequence content.

Each sequence contains between 0 and 7 steps. Steps can be added, deleted or shifted using the buttons, and they can be copied and pasted (into pre-existing steps). 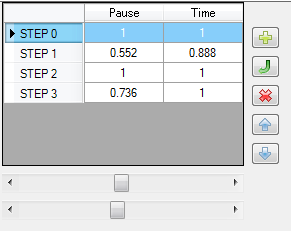 The lower part of the middle panel applies to the entire sequence. It enables you to set the number of times the movement is to be repeated, the ‘speed rate’ to carry out the entire sequence more quickly or more slowly (whereas the run time for a pose concerns only one part of the sequence) and the maximum acceleration (called ‘Ctrl Inertial force’). This parameter takes values between 0 and 127, and is 32 by default. The higher the value, the lower the acceleration and the more gradual the movement; the lower the value, the higher the acceleration will be.

The program automatically calculates the time necessary to carry out the movement.

You can also select the servo motor compliance level: the lower the number, the softer the joint established will be. This enables more fluid movements, but is not recommended for a walking movement, for example. The value varies from 1 (very low joint softness) to 7 (very high joint softness). 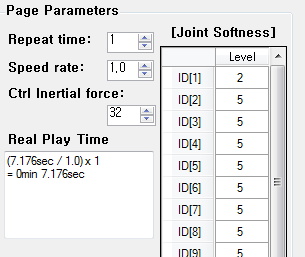 The right panel is the pose creation area. Here is where you are going to set each servo motor’s position for each step.

It comprises two lists of servo motor positions. The rightmost list, called ‘pose of robot’, shows your servo motors’ current positions. You can disable the joint (to move your robots by hand) by clicking on the unlit bulb at the bottom.

The left list is called ‘pose of step’. It contains the values for the position on which you are currently working.

The two green arrows enable you to either apply the pose to the robot (upper arrow) or save the robot’s position as a pose (lower arrow). 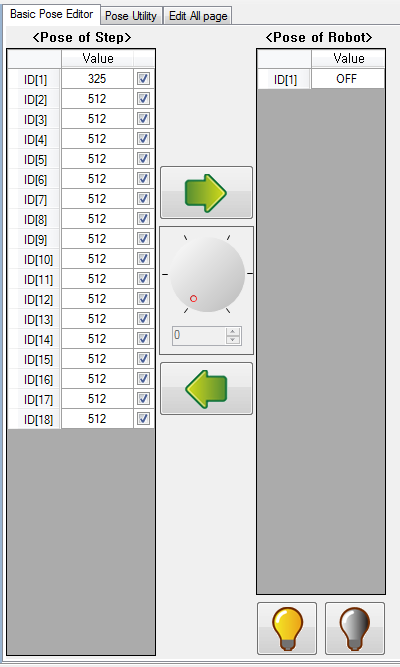 The other two tabs are:

Once you have defined your poses, steps and motion pages, you can download the file onto your robot by using the green arrow. If you are already working on the file that is in the controller, you can run the file directly with the red triangle.

To run your motion file from a task program, use the ‘Load (assignment value)’ command and set ‘Motion Page’ to the number corresponding to the sequence to be run. 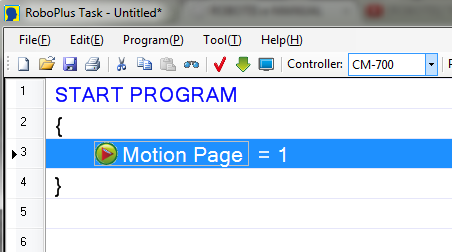